I'm like a chef putting together a table. The ingredients need to be there, but can be interpreted differently, It’s about feeling the whole 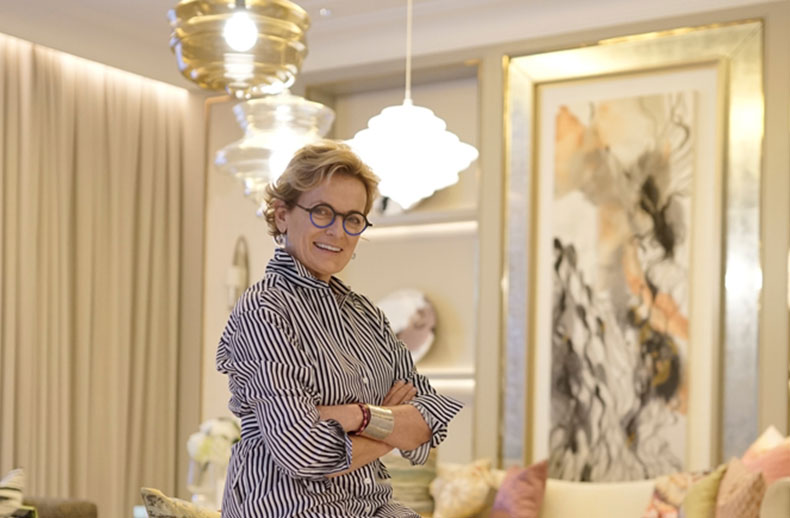 THE DORCHESTER LONDON and The Waldorf Astoria in London are two of several worldefamous properties given explosively creative makeovers by Alexandra Champalimaud, the woman who is also behind the Four Seasons Jakarta's spectacular interiors. Yet it's culinary metaphors that the Lisbon-born design dynamo uses when talking about her next project: The St Regis Jakarta

“I'm like a chef putting together a table. The ingredients need to be there, but can be interpreted differently, It’s about feeling the whole,” Champalimaud said during a recent interview. "There's no perfect recipe[but] there's an ability to see an end vision before you almost even start. What does this place need to evoke? How do we make it extraordinary?"

Champalimaud, the president and principal designer of an eponymous design firm in New York City that she founded in 1988, was in Jakarta to meet with Shirley Tan, the CEO of Rajawali Property Group, which owns the St Regis Jakarta. The pair became fast friends after meeting in London seven years ago and embarking on their first collaboration: The Four Seasons Jakarta. “Shirley inspires me,” says Champalimaud. "I'm easy to inspire when l have a good, provocative client."

Champalimaud, inducted into the Interior Design Hall of Fame in 2012, is not as well known as her works, which include global luxury destinations such as The New York Palace or the Hotel BeleAir in Los Angeles. Social observation and extensive travel have honed the design sense of Champalimaud, who says she manipulates color, texture and sound to create "memorable moments” in all of a hotel's spaces.

Take, for example, the Little Nell Hotel in Aspen in the US, where Champalimaud devised a bold, geometric blue-and-white carpet that suggested (more than underscored) the railroad tracks that made the town famous. In Singapore, she’s revamping Southeast Asia's most famous locale, The Raffles Hotel, preserving the essence of the venerable heritage site while devising a look for the 138-year-old property that will place it in the new millennium for hospitality, luxury and global travel.

For the St Regis Jakarta, slated to open in 2020 with 280 rooms, Champalimaud says that Indonesia's musical culture will be a key design influence-but don't expect to hear gamelan, however. “We've taken that element and put it on steroids.”

Looking to top the magnificent palm-inspired Lasvit chandelier hanging from the I3‘meter cupola ceiling at Palm Court at the Four Seasons, Champalimaud promises a "monumentally beautiful“ kinetic chandelier for the St Regis that will sing and speak to guests.

“It's going to be connected to the tones of a musical instrument. The chandelier is a big swath and huge wave of lights. It will undulate and move according to the music. It will be subtle, sensuous, rhythmic." Incorporating the work and spirit of local artisans is important for Champalimaud. A hotel, she says, is an expression of a culture, “We are reinventing a wonderful vocabulary for this new hotel, so [Indonesians] will be well represented within your own country.”

While Champalimaud doesn’t say that her interpretations of Indonesian design will be instantly recognizable, she does promise creative execution that will use local artisans and respectfully reconceive Indonesian design tropes.

“Traveling relentlessly, living on four different continents, experiencing many different cultures....you need to be cultured and respectful to be a designer. You have to observe the culture of each place,” she adds. Respect for perfect and contemporary artisanal creation drives Champalimaud, such as in her collaborations with UK- based leather master Bill Amberg, who she describes as a true craftsman. “We create a lot of new mediums together,” Champalimaud says, citing plans for huge leather walls that will sport engraved mural? like patterns.

"For people who do their craft so well, there's a soul that emits and you can't copy it. Once its done by others, the message and the emotion are different.” .