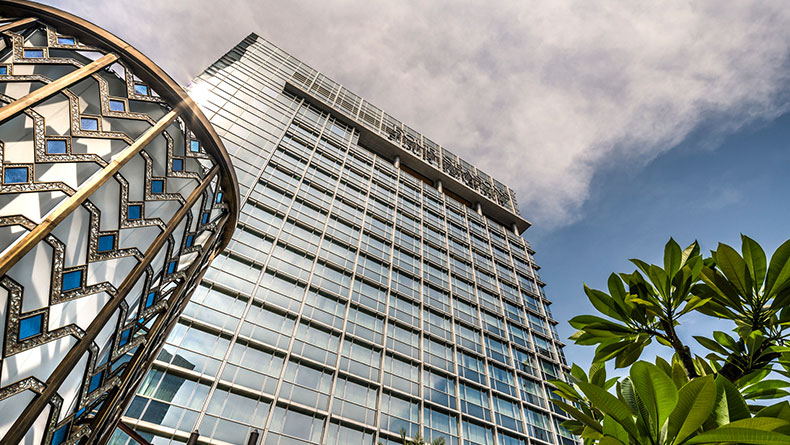 While today’s travellers are more likely to arrive in Jakarta by commercial aircraft or private jet, the city has long welcomed the world as one of history’s most storied marine ports. Now, the start of a new era in Indonesian hospitality begins with the much-anticipated opening of the all-new Four Seasons Hotel Jakarta.

“Jakarta is a very big, very busy city that simply never stops – and Four Seasons feeds on that energy, optimism and uniquely Indonesian friendliness and flair,” says General Manager Christian Poda, who leads a team of 250 carefully selected local and international staff. “We’ve created this beautiful new hotel with every possible luxury, and now we are thrilled to finally welcome our first guests and really bring it to life.” Ideally situated on Jalan Gatot Subroto within the city’s Central Business District, the all-new Capital Place, an award-winning architectural landmark by César Pelli, is home to leading businesses, and now, the stunning new Four Seasons Hotel Jakarta. With its excellent dining options, sumptuously appointed spa and handsome event spaces, it promises to be the preferred address of the city’s elite, as well as business and leisure travellers from around the world.

Be among the first to experience the new Four Seasons Hotel Jakarta: The Hotel is extending its Introductory Offer featuring a daily credit of IDR 1 million through July 31, and IDR 500,000 from August 1 to September 30, 2016. Guests may also choose the popular Bed and Breakfast package, which includes daily breakfast for two in the Palm Court, or the privacy of one’s suite.

Internationally-renowned interior designer Alexandra Champalimaud was inspired by Jakarta’s long- established position on the global stage, and by its commercial trading history and the influence of many cultures on its character, in particular Indonesia’s Dutch colonial period. From the moment one enters the soaring lobby with its grand staircase lit by a magnificent crystal chandelier, a classical European aesthetic is reflected in the colour palettes, materials and finishes, fine furnishings and sophisticated lighting.

With its complete commitment to showcasing the art of Indonesia, Four Seasons presents throughout its public and private spaces a carefully-curated collection of works by contemporary and historic artists. The city itself is the theme connecting the diverse collection, creatively depicting and interpreting its landmarks, history and culture.

Although strategically placed amid the city’s financial and business hubs, Four Seasons Hotel Jakarta has an element of urban resort style as brought to life by the landscape design of Bill Bensley. Known for his expertise in creating lush outdoor spaces with exotic flora, water features and resort-like terraces and open- air rooms, Bensley’s signature style is particularly well known to travellers who have visited Four Seasons resorts in Thailand.

One’s Own Pied-à-Terre in Jakarta

Intimately scaled with just 125 accommodations, the all-suites Four Seasons Hotel Jakarta feels as much a luxurious residence as a modern hotel. With sliding pocket doors separating sleeping areas from living areas, guests are free to settle in and make each suite their own – whether setting up a workspace and hosting impromptu meetings with colleagues, booking an adjacent suite so the whole family can enjoy a weekend in the city, or closing the doors on a long day of sightseeing, shopping or working and simply falling into quiet slumber.

Champalimaud’s refined design details and rich furnishings are punctuated with discreet, at-one’s– fingertips technologies and thoughtful considerations for which Four Seasons is known, including well- placed task lighting, a personal refreshment bar and a spa-like bathroom.

Meet Me at Four Seasons: Dining and Drinking Options

Four Seasons introduces a selection of all-new food and beverage concepts in Jakarta to welcome in-house guests and local clientele.

Located just off the grand lobby, Palm Court is a glorious space. A glittering chandelier, custom made by world-renowned Lasvit, is suspended from a rotunda ceiling 13 metres (43 feet) above, illuminating a grand yet inviting space for breakfast, lunch, cocktails and dinner, with tall windows opening to a garden terrace. While the menus are international in flavour, tradition reigns supreme in the daily Palm Court High Tea, with exquisite sweets by Executive Pastry Chef Lorenzo Sollecito, and savouries accompanied by a choice of TWG Teas. The inspiration for Nautilus Bar comes from the sea, and the cargo-laden ships that have traded the world’s treasures for Indonesia’s riches since the 7th century. Choosing from a signature cocktail selection rooted in the country’s most famous exports – nutmeg, galangal, clove and lemongrass – guests may contemplate their place in Jakarta’s living history as they study the panoramic mural of the old port of Sunda Kelapa behind the bar. Temptation is around the corner at La Patisserie, where Chef Lorenzo’s expertise is on full display in cases of confections from gâteaux and macarons to éclairs, financiers and madeleines. In an elegant, robin’s egg blue salon that would have made Marie Antoinette herself feel at home, La Patisserie offers the finest handmade sweets to take away in beautiful gift boxes and signature bags, or for those who simply can’t wait, to be devoured at one of its café tables.

No time to savour? Dolcetto is a grab-and-go venue for barista-prepared coffees and beverages, as well as light fare including gourmet sandwiches and salads. Dolcetto also offers catering options for local businesses or informal meetings held at Capital Place.

Relax and Rejuvenate: The Spa at Four Seasons

Like the Hotel itself, the Spa at Four Seasons Hotel Jakarta takes its inspiration from Southeast Asian cultures woven with global influences and updated with the most advanced therapies. In this opulent sanctuary, discerning guests can choose from traditional Balinese massage, Ayurvedic journeys and high performance European skincare from phyto-aromatic French brand Yon-Ka.

Spa Director Arie Sunia recommends signature treatments such as the Royal Body Boreh (a boreh is a traditional Balinese body mask of fresh herbs and warming spices), and the Luxury of Lulur, based on ancient Javanese beauty rituals. A special Soak & Sip menu pairs a choice of soothing baths with jamu – a traditional Indonesian herbal elixir made with locally-sourced spices. For today’s time-strapped traveller and local businesspeople, the innovative Express menu offers a 30 minute treatment followed by either a light poolside lunch, or a chill-down cocktail at the end of the workday.

Extensive facilities include eight treatment rooms with two couple’s suites and a hammam, a relaxation lounge, men’s and women’s locker facilities, a spa shop and 24/7 fitness centre. A secluded outdoor pool on the fifth floor rooftop is surrounded by tropical landscaping.

Coming soon: A women’s beauty salon as well as a dedicated nail bar and a gentlemen’s barbershop.

Getting Together, for Business or Pleasure

With more than 1,800 square metres (close to 20,000 square feet) of flexible function space, Four Seasons Hotel Jakarta is set to become the city’s preferred address for business meetings, conferences, social galas and weddings. In partnership with Four Seasons’ expert event team led by Director of Catering and Conference Services Ika Pranato, meeting planners and hosts can relax and enjoy themselves, assured that every detail is anticipated and executed to perfection.

The Grand Ballroom with its own pre-function area and adjacent Garden Terrace is easily split in two for multi-space events or smaller invitation lists. Up to 700 square metres (7,500 square feet) accommodate 350 people for a sit down meal and as many as 1,250 for a traditional Indonesian wedding celebration.

Additional function spaces include two salons on the second level, accessed via the lobby’s grand staircase, that are ideal for product launches. Three additional meetings rooms are on the third floor, and the Pool Terrace offers a sunbathed garden landscape by day, or an exotic setting by night.

The opening of Four Seasons Hotel Jakarta begins the latest chapter in the company’s story in Indonesia. Starting with its first Balinese resort on the shores of Jimbaran Bay in 1993, Four Seasons opened the original Jakarta location two years later. A second resort in Bali in the Ayung River valley followed in 1998 and soon the pair became a mainstay on the lists of the world’s best resorts. Today, Four Seasons Hotel Jakarta continues the tradition of hospitality first established in the city more than 20 years ago, welcoming back both international travellers and local clientele with an all-new hotel in a new location on Jalan Gatot Subroto.

About Four Seasons Hotels and Resorts

Founded in 1960, Four Seasons continues to define the future of luxury hospitality with extraordinary imagination, unwavering commitment to the highest standards of quality, and the most genuine and customised service. Currently operating 99 hotels, resorts and residences in major city centres and resort destinations in 41 countries, and with more than 50 projects in development, Four Seasons consistently ranks among the world’s best hotels and most prestigious brands in reader polls, traveller reviews and industry awards. For more information and reservations, visit fourseasons.com. For the latest news, visit press.fourseasons.com and follow @FourSeasonsPR on Twitter.